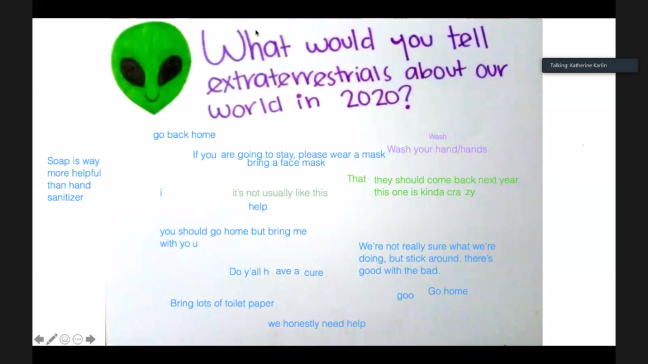 Today’s theme was “Imagining Other Worlds,” and the young writers started the session by answering the question “What would you tell extraterrestrials about Earth?”

Many suggested that the aliens go back home due to this year being “kinda crazy,” but others urged the aliens to make sure they wash their hands, use hand sanitizer, and don’t forget to wear their masks.

Dustin, one of our instructors, bounced off today’s question with a related activity: creating a meme conversation.

The memes were to follow story format by having a clear beginning, middle, and end and must hit the following points: express a reaction to the aliens coming, show the initial meeting or interaction with the aliens, and convey a reaction after either parting ways with the aliens or leaving Earth with them. The exercise resulted in a multitude of creative and humorous memes!

The genre focus for today was songwriting, so as the young writers put the finishing touches on their memes, songwriter Dylan Pyles joined our Zoom session as the day’s visiting writer.

Next, the young writers described the imagery in the lyrics—“intergalactic” imagery with a science fiction feel. Kylie identified the imagery as a metaphor while Paige used her knowledge of Elton John to talk about potential meanings behind the metaphor such as the impact of drug use.

Next, Dylan talked about what it means to live in a big cultural moment: how it impacts songwriting, and how history can speak to our own moment in time. As an example, Dylan performed Bob Dylan’s “The Times They Are a-Changin’” for the young writers before having them listen to Bob Dylan’s performance of the song.

The young writers were enthusiastic with their responses to the song. They showed their knowledge of history by talking about the JFK assassination, political turmoil, and the civil rights movement of the 1960s. The young writers also explored how the song feels relevant for today by identifying metaphors in the lyrics about the necessity of adapting to change.

The young writers then split into their groups to come up with their own lyrics for a verse of the song. The young writers showed excellent teamwork as they collaborated on their lyrics! They did an amazing job of not only following the structure of the original verse but adapting the lyrics to important issues today like quarantine and pollution. Their lyrics were incredible and really resonated with our current cultural moment!

We then returned to the large group where each group shared their verse. Dylan combined the young writers’ verses and performed the united version of the song for them so that they could hear the finished product, and the result was beautiful!

Thank you so much, Dylan!

After the lunch break, our director, Katy Karlin, introduced the young writers to blackout and found poetry. These forms involve the writer finding an already established text and then blacking out the unwanted words, circling the words the writer wants to keep, or cutting out and rearranging the words. Katy shared her own example of blackout poetry which she created from a Wikipedia article after she was inspired by yesterday’s tour of the Field Station 4 installation at the Beach Museum.

The young writers were given the chance to practice found poetry in the large group by circling the words that resonated with them in a shared article. Check out the colorful results below!

After a short break, the young writers amped up the energy with another game. Today’s challenge was to gather the most socks! As of this afternoon, our winner is Pyper* with 48 pairs of socks! Stevie estimated owning 47 pairs, Aspen had 32, and Kylie and Lily each had 31! We are still awaiting Charlie’s count to name an official winner!

After meeting again in small groups to continue their writing projects (and consider what they will read for Friday’s reading), Dustin introduced our final songwriting activity. Dustin shared the song “Stuck with U” by Ariana Grande and Justin Bieber with the young writers before returning them to their small groups to collaborate on a parody version of the song.

The young writers were incredibly creative with their parodies, with one group writing about Napoleon Bonaparte and another writing about being stuck with someone you hate.

We ended today’s workshop with the closing question “Who are you happy to be stuck with?” The young writers really love their pets! What an incredible job on the Zoom white board!

Thank you for another fun and exciting day, young writers!